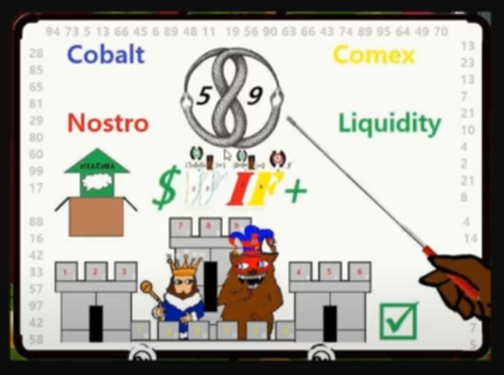 In the XRP (Ripple) digital asset community, the 589 number has a strange aura about it. Some people grin when they see that number pop up in an online XRP chat while others just shake their heads. The BearableGuy123 Telegram character, supposedly an insider about all things XRP, mentioned it in one of his images (see above) in 2019.

So when this image first came out in 2019, people thought that it meant the end of year price for XRP would hit $589! Keep in mind that the ever growing audience of XRP holders has been trying to decipher the BearableGuy 123 images for the past three years. I can’t tell you how many YouTube personalities jumped on that bandwagon. And what happened at the end of the year? Nothing. Everyone, especially those YouTube personalities, were feeling that they had been hoodwinked in the least and manipulated at worst. But as time progressed the 589 was deciphered as the Comex Rule 589. An entry on the Silverdoctors.com web site describes the Comex Rule 589:

“The COMEX Rule 589, which entered into force on 22 December 2014, could be applied at any moment. Let’s suppose, that Silver price is 16$. At some point nobody will want to sell its physical Silver. Buyers will then be forced to raise the auction. After a rise of $ 3, the market will be stopped 2 minutes to let buyers and sellers negotiate. Then the market resumes, the auction goes up by $ 3 … etc. When the threshold of $ 12 rise in the day will be reached, without anyone wanting to sell physical silver, the market will be closed. And there will be no fixing for that day. Without a fixing, nobody will be able to buy or sell silver in the world till the next fixing. The second day, the silver market opens at $ 28. But nobody agrees to sell physical silver at this price … so as the day before, the price rises by $ 12 … but there is once more no fixing. In 2 weeks, 10 business days of trading, courses will increase from $ 16 + $ 120 = $ 136.  … Have fun and do the math by yourself.”

The current train of thought is that the XRP digital asset may be tied to a precious mental like gold or silver once the world’s economy collapses and digital currencies take on an even stronger role in everyone’s lives. In the future, while talking to future digital asset holders, get used to hearing of the “infamous” 589 number and all of hope and eventual disappointment tied to the number. And don’t be surprised if you keep seeing that number pop up in all sorts of strange locations.